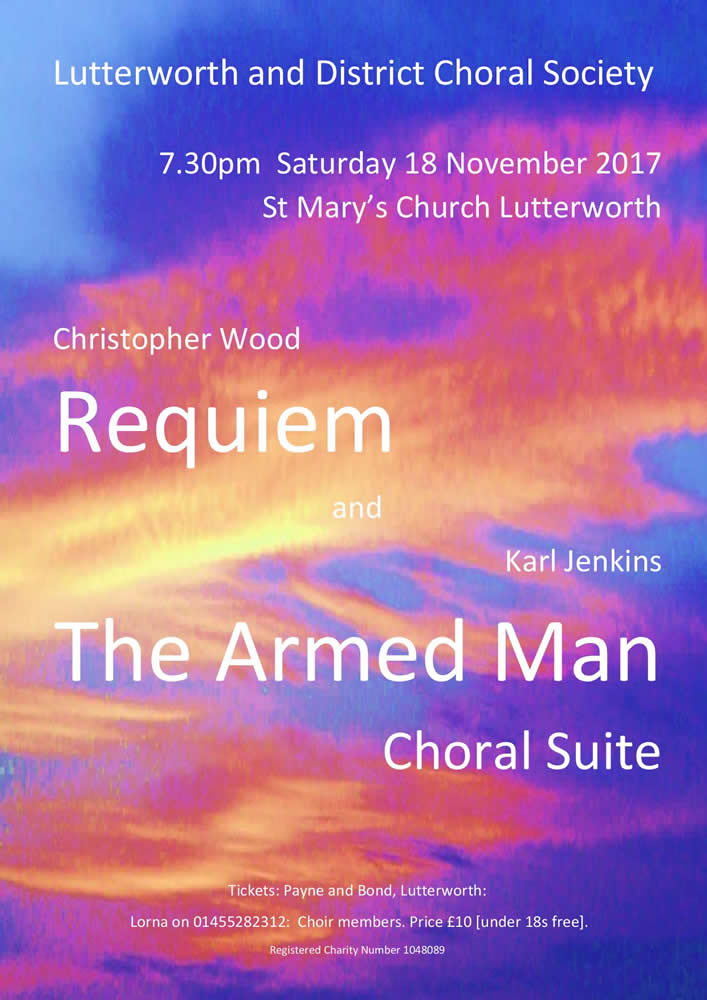 This concert was a unique and exciting choral event in the history of Lutterworth and District Choral Society. In 2015, the choir was invited to take part in a choral training project which was launched across the country to selected choirs. The aim of the project was for a new work, Requiem by Christopher Wood, to be learned and shared culminating with a performance at the Royal Albert Hall. The workshop was held in 2016 at St Mary’s Church, Lutterworth with the composer in attendance. The choir members enjoyed this experience so much that it was decided to add the ‘Wood Requiem’ to their concert repertoire for 2017. The concert also included the choral suite from The Armed Man by Karl Jenkins.

Christopher Wood wrote the Requiem in 2002 when he was struck by images of the funeral of the Queen Mother and the number of people who queued for hours to pay their respects. Wood thought, “If those people were a choir, what would they sing? What would capture that mix of emotions?” Wood, a former cancer surgeon who now develops cancer drugs, had never composed a note of music, but music had always been a vital part of his life. It took him about eight years to write the Requiem and a further two years for the orchestration. The first live performance took place at St John’s Smith Square on 12 December 2012. With the composer’s support, L&DCS gave the first ever public performance in the local area and members are looking forward to joining with choirs from around the country for a large-scale performance in the Royal Albert Hall sometime in the near future.

Comments from the composer and the choir members following the performance:

It was a wonderful performance of the Requiem and an evening to remember. The singing was superb. You must have been very proud of the choir. I think the audience thoroughly enjoyed the whole event too; a lot of happy people and it’s always so rewarding when you know the audience had a good time. They will be back for more.

So, many thanks for singing the Requiem. It always gives me enormous pleasure to hear it performed.

After struggling in rehearsal, something finally clicked about two weeks before the performance. I thoroughly enjoyed singing the Requiem last Saturday. Chris Wood very kindly gave the altos some lovely tuneful lines. On talking to him after the concert he seemed sincerely happy with how we had performed and is hoping to put on a Midlands event. It would be lovely to sing it again.

Only to have been part of this performance can you understand the sheer excitement and joy of being part of a choir. The drama of the last rehearsal was followed by a triumphant evening rendition, when we all sang our hearts out. I brought home a signed copy of Requiem, a memento I will always treasure.

Getting to grips with the Wood Requiem was hard work. It was more or less unknown to most of us but as I got to know it I realised it was rather a lovely work. On the night of the concert everything came together and it was an absolute delight to perform – truly uplifting. Perhaps having Christopher Wood present spurred us on. Whatever the reason, the choir exceeded all expectations. The performance as a whole was electrifying. I would sing it again in a heartbeat. Wow! What a success!

The concert was a wonderful and unique occasion. I’m so glad I was able to take part and meet the composer.

With my limited knowledge of written music, I joined the choir seven years ago with some trepidation. Little did I know that I could eventually sing to the high standard of the ‘Wood Requiem’ and relax and enjoy it. Thank you to Lutterworth Choral Society for the friendly and encouraging way they have helped me to such such beautiful music. It is indeed ‘a joyous thing.’

I wanted to let you know how much we enjoyed being part of the L&DCS for the last few months and thank you for making us so welcome. We loved singing the ‘Wood Requiem’ and The Armed Man culminating in Saturday’s concert.

It was very exhilarating and hugely exciting to be part of such a wonderful evening and a huge privilege to have the composer with us.

After the final ‘Libera Me’ with the full choir and soloists, the audience reaction was amazing. The sea of smiling faces in front of us left no doubt as to their enjoyment. I felt privileged to be part of such an uplifting experience.

A most enjoyable challenge with a very rewarding result. A beautiful sound.

Alan and Lorna with Christopher Wood

Snaps of the event