Music from the Old and New World 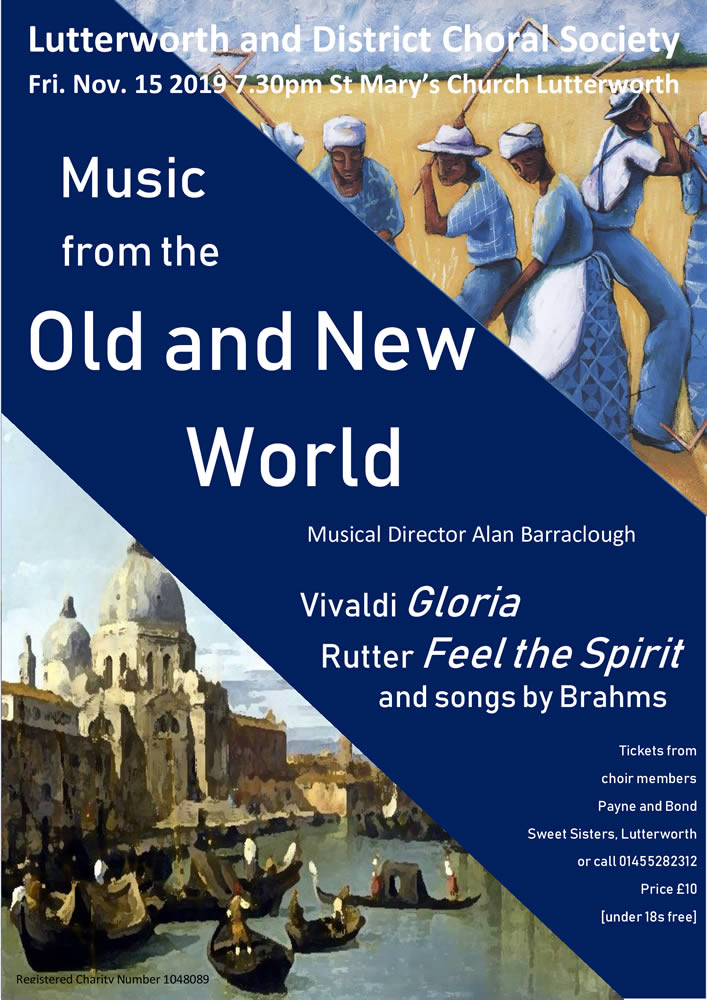 Come and enjoy an evening of uplifting choral music from the Italian Baroque of Vivaldi’s Gloria to Rutter’s Feel the Spirit, based on spirituals of America’s Deep South. With guest soloists Andrew Ashwin, Lindsey Ashwin and Karen Wilson-de-Roze, and organ accompanist Robert Foreman.

Comments from the audience:

~ “I thoroughly enjoyed the concert. The programme offered something for everyone as always, and there was a very warm community atmosphere in the audience (I heard several people commenting on that and I agree).”

~ “I particularly enjoyed the New World Spirituals: the soloist, the choir and the accompanist performed as one and well deserved the very enthusiastic audience response.”

~ “The faces of many in the choir were tense in the Gloria and constantly looking down at their score. It must have been very hard for the conductor to hold them together.”

~ “The Spirituals were a triumph. Choir singing their hearts out; the mezzo’s voice so suitable for the songs and she was really at ease and involved. I wouldn’t have missed it for anything.”

~ “We both thoroughly enjoyed the whole concert. As German speakers, we were particularly impressed with the soloists’ pronunciation in the Brahms songs – we could hear every word! There was a real ‘feel good’ atmosphere.”

From a choir member:

~ “After a gap of over twenty-five years. a series of life-changing events two years ago provided the catalyst for my return to choral singing. On Friday evening I was once again transported, and was totally absorbed this time in the music of Vivaldi and Rutter. I feel my life has been enhanced by the knowledge I have gained from the past weeks’ rehearsals. I feel fulfilled to have learned these new works and to have had the opportunity to perform them; rewarded to see the delight on the faces of the audience and to hear such positive comments from them; uplifted and joyous as I left the church with such a sense of well-being. Thank you LDCS!”