At 7.30pm every Monday we meet at
the Lutterworth Methodist Church
All singers welcome!

Alan grew up in Welwyn Garden City apart from the war years when his family was evacuated to Derby. After the war he studied the piano with Dorothy Hess and performed in several student recitals in the Wigmore Hall in London. After graduating in Natural Sciences at Liverpool University and a spell in the army in the Far East, Alan started teaching at Hinckley Grammar School in 1958. Then, in 1961, he joined the staff of Lutterworth Grammar School where he stayed for 32 years.

He sang with the Bach Choir and the Philharmonic Choir in Leicester and other choirs in the county but gradually conducting became a more absorbing hobby. Alan co-founded the Lutterworth Opera Group with Peter Harrison in 1968 and was co-musical Director with John Lenton for over 40 years. Alan began playing the organ in the early 1950s and is currently based at St Mary’s in Welford though he has played in most local churches. He directs the South Leicestershire U3A choir in Market Harborough. In January 2007 he was appointed the Musical Director of Lutterworth and District Choral Society and has enjoyed every minute (well nearly!). 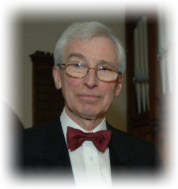 “Although my professional career involved teaching Natural Science, music has always played an integral part in my life. I have accompanied, conducted and sung in four-part choirs for over fifty years. My aims, as a musical director, are to realise the vocal potential of the choir, to perform a wide range of music and to have fun doing it!

We do not have auditions and welcome anyone with interest and enthusiasm regardless of experience.”